How to get rid of dandruffDandruff is one of the most common cosmetic problems. However, you can solve it if you know some life hacks from the field of medicine. We have prepared for you…

Who and why need to strengthen blood vesselsThe role of the vascular system in the human body is enormous. It supplies blood, and therefore oxygen and nutrition, to all tissues and organs. Damage to blood vessels, disruptions…

What do wet palms mean? 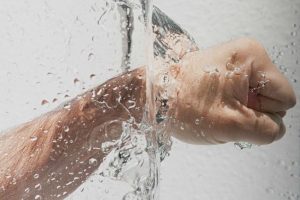 All people sweat. This is a natural physiological process. But some people sweat excessively. It can cover the entire body or affect a separate area. For example, palms. This causes serious discomfort and can lead to the development of psychological problems. So why do palms get wet? What does this symptom say?

4 simple causes of sweating
Sweat acts as a thermostat in the human body. If the body temperature rises, then an alarm signal is sent to the brain. The thermoregulation center (it is located in the brain) immediately starts the “cooling system”. This mechanism manifests itself in the form of increased sweating. Body temperature drops.

To cause increased sweating (doctors call this pathology hyperhidrosis) can be completely banal reasons.

Taste preferences
Palms often become moist in people who prefer hot, spicy spices and caffeine. These foods stimulate the production of the neurotransmitter acetylcholine. And it activates the functioning of the sweat glands. In addition, the neurotransmitter can increase the concentration of stress hormones in the body. This condition will exacerbate hyperhidrosis of the palms.

stress
Strong experiences (public speaking, exams, interviews) can significantly increase sweating. As a rule, anxiety is accompanied not only by hyperhidrosis of the hands. A person may feel an increased heartbeat, feel trembling in the limbs. This is a natural response to stress.

Experiences can provoke sweating of the hands
The production of cortisol and adrenaline increases in the body. These hormones help deal with stress. But at the same time they cause an increase in body temperature. The brain immediately starts the “cooling system”.

In chronic stress, the sweat glands work all the time in an enhanced mode. In this case, a person complains of constantly wet palms.
Physical activity and heat
In these situations, the mechanism of thermoregulation is triggered. Active sports, excessive heat in the street, visiting the sauna lead to an increase in temperature. With the help of sweat, the body tries to normalize the state of the body.

Deficiency of nutrients
Sometimes the causes of the problem must be sought in the lack of vitamins and minerals. Take a close look at your diet. The palms sweat very actively against the background of a lack of iron and magnesium.

If you notice wet palms in a child, then be sure to show the baby to the doctor. Most often, such a symptom indicates a lack of vitamin D in the body. A deficiency of this substance can lead to the development of serious consequences. Sometimes sweating of the palms speaks of thyroid disease, heart failure, or drug abuse.
Why Wet Palms: 6 Common Pathologies
Excessive sweating may be based on diseases. Doctors are aware of many pathologies that can trigger hyperhidrosis. Most often, the following violations become the sources of the problem.

During physical exertion in the heat, the whole body sweats
Overactive glands
High sweating can be caused by a malfunction of the sweat glands, in which the latter begin to work in an enhanced mode. Such a process can be total. In this case, increased sweating covers the entire body. Sometimes the high functionality of the glands is noted only in some areas, for example, on the palms. The reasons leading to such violations have not been reliably established.

Doctors believe that excessive activity of the sympathetic nervous system is to blame for hyperhidrosis.

The sympathetic system controls the release of adrenaline, heart rate, and controls vasoconstriction. And all these factors can lead to increased sweating.
Mental disorders
Increased sweating is typical for people suffering from various personality disorders, phobias. Sometimes a similar sign can signal a prolonged depression.

As a rule, with mental disorders, sweating of the hands is accompanied by many additional symptoms. Among them:

sudden dry mouth before performances;
heart palpitations;
dependence on alcohol or sedative medications;
increased urge to urinate in crowded places (typical of social phobia);
the appearance of shortness of breath, dizziness;
the occurrence of nausea.
Hormonal disorders
Sometimes the causes of wet palms lie in endocrine pathologies. Most often, an unpleasant problem is observed with hyperthyroidism (excessive activity of the thyroid gland), diabetes mellitus, acromegaly, diseases of the reproductive system in women caused by hormonal disruptions.

Flashes of sweating can be observed in women during pregnancy, with menopause. A similar problem occurs in boys and girls during adolescence.
Infectious viral diseases
Various colds, flu, SARS can lead to increased sweating. Such pathologies are usually accompanied by fever. And this leads to hyperhidrosis.

Who and why need to strengthen blood vesselsThe role of the vascular system in the human body is enormous. It supplies blood, and therefore oxygen and nutrition, to all tissues and organs. Damage to blood vessels, disruptions…